Erik Johnson was born September 28, 1993 in Scottsdale. He attended Aztec Elementary, Mountainside Middle and Desert Mountain High School. He had also enrolled at Arizona State University, where he wished to pursue a degree in Kinesiology. 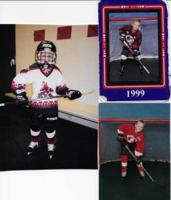 In June, 1998 the Coyotes Ice Den opened in North Scottsdale. Erik (age 5) was enrolled in one of the first ‘learn to skate’ programs offered, and after completion of the 6 week program, he was determined to try the ‘learn to hockey skate’ program under the wing of Coach Dennis LeClair. At the end of that learning program, Coach Dennis suggested that Erik enroll in the CAHA Mini Mite house program. During this time, he obtained the nickname “Shakey.” Most all of his friends and the hockey community knew him by that name. He also picked up the jersey number “5” which followed him for the next 12 years.

A solid defensemen from early on (he was usually the tallest player on the team – and certainly one of the quickest and more skilled tactical players), he played at CAHA for 5 years, until 2003 when he followed Coach Dennis to play for the VOSHA Mustang Squirt AA travel program. After three successful years at VOSHA (including several tournament wins in Canada), Erik (and Coach Dennis) returned to CAHA where Erik played at the Bantam, U-16 and U18 A, AA and AAA levels.

Erik was a team member of many championship winning teams, including the prestigious Silver Sticks tournaments and he also competed at the USAHA Regionals and Nationals several times. 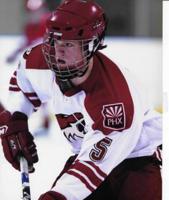 In 2010, Erik was injured while playing in a tournament against Shattuck-Saint Mary’s in Faribault, Minnesota – which required surgery to repair a severely torn labrum. He spent 6 months in rehab and tried to return to the ice at the U-18 level, but his shoulder kept him from being competitive.

Although also a very gifted baseball and basketball player, Erik’s main passion from the age of 5 was hockey. He often wrote about it in his school journals and in school reports. He was usually seen wearing hockey related clothing. His best pals were hockey teammates. His email address and Facebook page were both under the name of “Hockey4EJ.” His goal was to someday play at a D-1 college, and like many of his friends – he had aspirations of someday making it to the professional ranks.

Erik had many friends from around the Valley of the Sun – most of which were his own hockey teammates – or they were competitors from other organizations such as DYHA, Polar Ice, VOSHA, CAHA, PF Chang’s and the like. And interestingly, Erik skated for one coach for all 13 years that he played – Dennis LeClair.

Unfortunately, Erik tragically passed away in December, 2013 at the age of 20.

Knowing just how very much ice hockey meant to Erik (and his family), his parents decided it would be very fitting to memorialize ‘his love of the game’ by establishing the “Erik S. Johnson Memorial Fund” that will be used to promote and support young and new players coming into this amazing sport. We are starting with the Junior Sun Devils program by helping to offset the cost of each players ice, coaching and equipment expense. Ultimately, we hope to grow the fund so that we can also sponsor young and aspiring players to compete at the more premier ice hockey levels.

Erik is survived by his parents Gordon and Sue Johnson, his younger sister Krista and older brother Matt – as well as his extended hockey family.